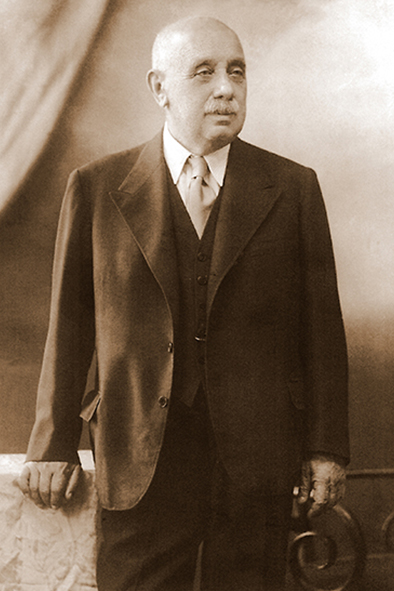 The story of Gedeon Richter Plc goes way back to 1901, when the founder, pharmacist Gedeon Richter bought the Sas Pharmacy, which is still operating and owned by the Company. It was in the pharmacy’s laboratory where Richter not only established his company, but also laid the foundation for the entire Hungarian pharmaceutical industry.

In the beginning, the emphasis in the pharmacy’s laboratory was on producing organotherapeutic preparations made with extracts of animal organs. All the hard work paid off, and in 1907 the rapidly growing company moved its production into a newly built factory in Budapest's Kőbánya district. The first drugs produced here included a disinfectant, fever and pain relievers, the most famous of which was Kalmopyrin (acetylsalicylic acid), which is still used today.

In 1923 the firm was restructured as a limited company named the Gedeon Richter Chemical Works. Success was due not to luck, but to expertise and the pursuit of the high level of innovation manifested in development. In addition to being among the first firms to market insulin in Europe, the researchers’ success is indicated by the fact that the Company had nearly one hundred pharmaceutical specialties before the outbreak of the First World War. Between the two world wars the Company had 10 subsidiaries and 40 representative offices operating abroad and agents on all five continents. By the time the Second World War broke out, Richter was one of the largest exporters in Hungary.

The war, however, interfered with the development of the Company, which until then had only experienced uninterrupted growth. After the war it lost its export markets and subsidiaries in Western Europe. It turned eastward and from the early 1950s vigorously researched original drugs. The Company began to conduct polypeptide research and to develop manufacturing processes for various steroid derivatives. In 1948 the Company was nationalised, and its name was changed to the Kőbánya Pharmaceutical Company. Its greatest success came by using its own process to manufacture vitamin B12. It was this preparation that made the Company an important player in the global market. It was the Soviet Union’s leading supplier in the 1960s, and the 1970s saw a steady increase in its exports to the West.

It vigorously expanded its range of activities and capitalised on its decades of experience in pharmaceutical manufacturing by developing the Richtofit line of herbal products and a line of cosmetics marketed under the brand name Fabulon. Cavinton, the original product that improves circulation within the brain, appeared on the market in 1977 and was a worldwide success. It has been one of the Company’s (renamed Gedeon Richter at the end of the 1980s) best known products ever since.

The winds of political, social and economic change that swept over the region in the 1990s failed to spare Richter, which became loss-making at the time. As a consequence, the Company again concentrated primarily on pharmaceutical preparations for human use. It gradually phased out the manufacture of pesticides, veterinary drugs and cosmetics and at the same time proceeded to update its human pharmaceuticals portfolio.

In 1992 new management under the leadership of Erik Bogsch took the helm at the Company, and a new strategy put it back on its feet. Thanks to unparalleled expertise, outstanding employees and managers, the Company was able to weather the historical storms of the twentieth century, despite great losses.

Richter has not only held onto its position in Hungary; but it has developed into the predominant pharmaceutical company in Central Eastern Europe. At the same time it greatly increased its importance in the markets of the CIS countries, the European Union, Japan, China and the United States.

The Company is present in more than 38 countries with five manufacturing facilities, 29 representative offices, and 38 sales subsidiaries and wholesale companies.

The Company’s main goal is to develop its product portfolio to be able to continuously offer innovative and outstanding products at affordable prices.